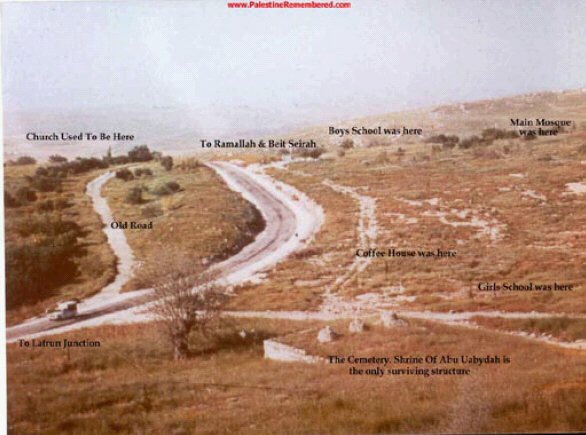 Imwas, my father’s family’s village, in 1968 after its destruction during the Six-Day War

It’s a question I ask myself a lot lately.

I ask it when I fill in surveys asking for my race and ethnicity, when people hear “Mustafa” in my last name and ask me how I got it, and when my boss tells me I add more “diversity” to the office.

How do I explain to people, and even myself, that I still see myself as one of the whitest white women to ever exist?

After all, I might love falafel, kufta, and baba ganoush, but I had to look up how to spell those last two words right.

I might have the olive skin, deep brown eyes, curly hair, and hooked nose of my father and his family, but I’m still “white” to most people. To some, even an “exotic” white. They know there’s “something in me,” but they don’t know what it is.

I didn’t become emotionally invested in the Palestinian cause from birth. Instead, I learned about the conflict through talks with my Christian college chaplain and through books and plays written from a white perspective.

I have walked comfortably in this world as a white woman, and no one has ever suspected I might be anything else.

Hell, I barely have either.

I didn’t start using “Mustafa” as part of my last name until I was 24 years old. No one coerced me into doing it. I wanted to start embracing this side of my identity.

But it’s been 4 years, and I’m still not sure what it means to be a “Mustafa.”

So am I Arabic or white? Am I both/and, either/or, or none/neither?

But I have yet to find a story of someone with an Arabic parent and a white parent.

I want to claim my family’s story and identity in a way which is true and genuine, not to earn a cheap badge for the sake of “diversity.” Most of my life, I only had one family identity. Then one day, I discovered the second family. Now, as a married woman, there is a third.

And I’m still figuring out how to be a part of each of them.

I want to learn and engage with both sides of my story, but is it possible when I have to study more than live through one aspect of it?

How do I do this?