On Sunday, I celebrated All Saint’s Day at my Episcopal Church with our Sunday School students. We played a game called “Musical Saints,” a variation on musical chairs in which each chair is labeled with the name of a saint, and the students pick the chair of the correct saint after receiving a clue.

In my preparation for this game, I discovered that the Episcopalians have a plethora of saints. Everyone from Mary Magdalene to Francis of Assisi is represented, and some modern heroes like Sojourner Truth, Florence Nightingale, Johann Sebastian Bach, and C.S. Lewis also qualify as saints. The ancient, ascetic people were obvious choices to the children and assisting adults, but to the modern, “secular” saints, they asked, “Why are these people included?”

I did not wonder why Bach and Truth were in the same league as Francis and Mary. In social reform, music, literature, education, ministry, and ascetic life, each saint reflected the light of God in the world. They brought to focus something of God’s character previously hidden. They noticed God in places others had looked right through.

Why wouldn’t they be considered saints?

Somehow, we’ve accepted the idea that being a “religious” person, like a minister or an ascetic, is the only worthy vocation to qualify for sainthood.

But some of the saints that have influenced me are not overtly religious.

Some of them are even fictional.

Between Tuesday and Wednesday, I ended up calling on a few of my favorite fictional saints.

On Tuesday evening, after a long day which involved a doctor’s appointment, working, and voting, I arrived home to watch some Doctor Who (Season Nine) while I ate dinner.

As fate would have it, I found myself on The Zygon Invasion/The Zygon Inversion storyline.

The Doctor made his passionate speech, calling out two rivaling species and begging them to make peace with each other. As he spoke, I thought about my neighbor who strongly supported the candidate I feared. I wondered how radical, and maybe even necessary, it would be to take the Doctor’s words and put them into action.

{Potential spoiler graphic for Season 9 of Doctor Who below}

The election ran its course, but I slept through a good portion of it. After hearing the outcome upon awakening, I got myself out of bed to make my daily cup of tea. This was my mug of choice.

After finishing my breakfast, I sipped tea out of this mug while my roommate and I talked about this new territory our nation is entering. As I sipped, I remembered Harry Potter’s various interactions with people intolerant of difference, and I reminded myself of the importance of being with people who are afraid.

I got through my commute and spent 6 hours at my secretary job. When I left, I changed into street clothes before heading to choir practice, which included one of my favorite T-shirts. 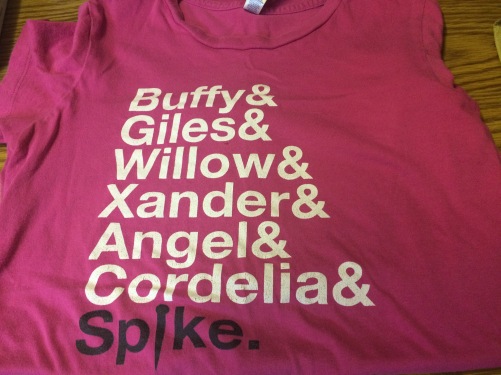 I wear this shirt on days I need “Slayer-strength” to get through the day, and on this day, I needed all the strength I could get. So before I put it on, I read the names and remembered the characters who bore them. I reflected on all their beauties, imperfections, strengths, flaws, victories, losses, pains and gains, and I carried them with me throughout the rest of the day.

In those two days, I carried the stories of the Doctor, Harry Potter, and Buffy the Vampire Slayer in my heart and on my body. The tokens I carried did not endow me with powers like super-strength or magical ability, but they reminded me of the adventures the characters went through, the trials they faced, and the friends they found in enemies. In remembering their stories, I found peace that we will work through whatever we face.

I regard these characters as saints, because saints are the ones whose stories we tell to find the strength to keep going.

This is why saints, whether real or fictional, are so important. We need Mary and the disciples, the Doctor and his companions, Francis and Clare, Harry and his friends, Absalom Jones and Sojourner Truth, Buffy and the Scoobies, and many others to remind us of the divine image and humanity we carry.

The Doctor, an alien Time Lord who travels through space and time, acts on his Messiah/God-complex in harmful ways then finds redemption. He is beloved and feared by all who meet him. He’s not sure if he’s a “good man,” and he wonders whether it’s worth winning a battle at the cost of losing a life. He is a man who struggles with the laws he is bound to obey, and every now and then he breaks them. He is a traditionalist who pushes the bar, and sometimes, he pushes a bit too far.

He is a saint to all who have struggled with their own desires to fix and control everything. His story reminds us of the importance of presence, of doing what we can, and knowing how to repent when we have gone too far.

Harry Potter is a moody teenager with a heart of gold, a boy who is loyal to his friends and willing to show compassion and mercy to his enemies. From a young age, he could conjure a Patronus, a charm produced from happy memories, despite all the traumas he faced. He looked at the magical world with fresh and wondrous eyes, and he was absent-minded and easily confused when others seemed to understand everything.

He is the saint to all struggling with deep sadness and pain, and to those whom Death has touched in significant ways. His story reminds us to draw out joy in the midst of pain, to learn to live life in such a way that Death can be greeted like an old friend, and the absolute necessity of never going it alone, even when doing so can keep others safe.

Buffy is a fighter and leader who loves clothes, dancing, make-up, and kicking ass for comfort food. She is an empowered woman who takes crap from no one. She pushes herself away from others, but they bring her back to them. She jumps into the action and asks questions later, but she takes responsibility for her choices when they are less than agreeable. She falls in love, gets hurt, and does it all over again. She listens and learns from and with others, fights to keep her family and friends safe, and is willing to show mercy and compassion when people repent.

She is a saint to all who are seen as less than capable, who have put their trust in others only to be hurt and betrayed, and to those who struggle to let others in. Her story reminds us of the strength and power we carry within us, the need to share that power with all, and the importance of friendship.

Saints are those very human people who teach us to look into life’s darkness and proclaim God’s love triumphant in the end. The Doctor, Harry, Buffy, and many more characters, in their divine humanity, proclaim light in the midst of darkness and show us how to keep seeing this light when everything tries to snuff it out.

I’m thankful that we remembered All Saint’s Day on the Sunday before Election Day. In learning the stories of the saints, we remember the saints in our own lives, both real and imaginary. In turn, those saints empower us to move forward when life as we know it merges into a path of change and uncertainty. If they could do it, so can we.

So in the midst of division, fear, hatred, and confusion, let us look to our saints. Let us embrace their humanity and prophetic witness in difficult times. Let us learn from them, not to become “perfect,” but to become more aware of God’s presence in new ways.

We are all stories in the end. Together, let’s make them good ones for those who come after us.

Who are your saints? What parts of their stories invite you to make it part of your story? What encouragement do they offer you in times of change?